More on Debt to GDP Ratios 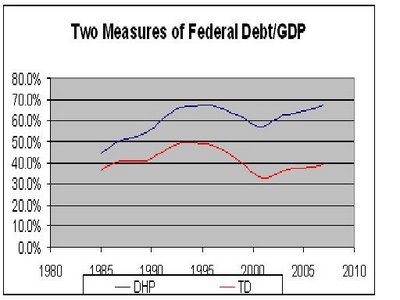 It seems my ire should have been directed towards Edward Lazear:

Will the tax cuts pay for themselves? As a general rule, we do not think tax cuts pay for themselves. Certainly, the data presented above do not support this claim. Tax revenues in 2006 appear to have recovered to the level seen at this point in previous business cycles, but this does not make up for the lost revenue during 2003, 2004, and 2005 … It is also worth noting that because our revenues are growing at such high rates right now relative to spending, the ratio of the publicly-held debt to GDP, which most economists view as the best indicator of the sustainability of our current budget situation, is expected to decline this year. Not only is our debt-to-GDP ratio improving as a result of our high economic growth and enhanced revenues, but it is very close to our 40-year historical average, and lower than at any point in the 1990s. As a result, our debt situation is favorable relative to both its past and to the debt situation of other major industrialized countries (Figure 5). This should not be taken as a reason to be complacent. Indeed the opposite is true. If we do not control our spending, both on the discretionary and entitlement sides of the budget, the pattern that we are seeing in the current year could easily reverse, and we could find ourselves in a debt situation that requires higher and higher interest payments relative to our GDP in the future. This is not a burden that we want to pass on to our children and grandchildren.

Lazear is suggesting the reduction in tax revenues was only temporary, which is simply not true. OK, nominal tax revenues in 2005 were 9.4% higher than they were in 2000 but prices were 12.7% higher. Taxes as a share of GDP were 20.9% in 2000 but only 18.0% in 2005. Lazear is also spinning the free lunch supply-side nonsense that real GDP growth has never been better. Excuse me but the average annual growth rate over the past 5.5 years has been a paltry 2.6%. And perhaps Dr. Lazear can explain to us how reducing national savings is good for long-term growth – once he wrestles control of his pen away from Karl Rove.

CalculatedRisk might take exception to “the ratio of the publicly-held debt to GDP, which most economists view as the best indicator of the sustainability of our current budget situation”, which gives me an excuse to graph the ratios of Federal debt held by the public (DHP) and total Federal debt (TD) relative to GDP over the period from 1985 to 2007 (projected) – both taken from Table B.79 of that Economic Report of the President, which was prepared by Dr. Lazear and his staff. The distance between the two series represents the Federal bonds held by those Trust Funds – which include the Social Security Trust Fund. The ratio of total Federal debt to GDP peaked in 1996 at around 67% before the Clinton era of fiscal responsibility reversed the escalation. Alas, the the Clinton era of fiscal responsibility ended with all those tax cuts pushed by George W. Bush and by next year, the ratio of total Federal debt to GDP will again pass 67% and is not projected to stop climbing.